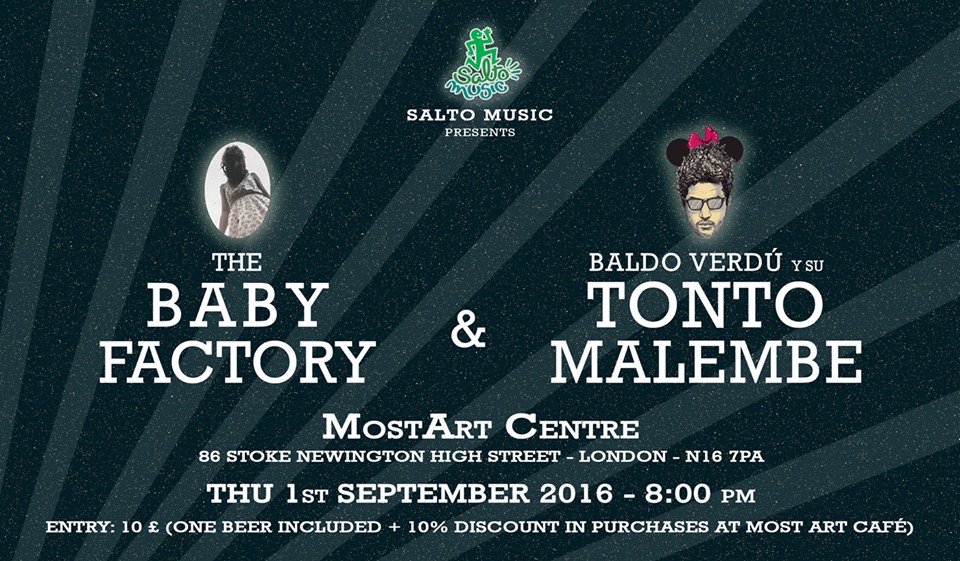 Salto Music presents:
The BaBy Factory and Baldo Verdú y su Tonto Malembe Live at MostArt Centre!
Come and join us in the heart of Stoke Newington to have a wonderful time with the music of The BaBy Factory (Rock) and Baldo Verdú y su Tonto Malembe (Afro Venezuelan Psychedelia).
The entry is 10 pounds and it includes a beer and 10% discount in any purchase at MostArt Café.
We’re looking forward to have you!
WHERE:
MostArt Centre
86 Stoke Newington High Street
(Entrance from Tyssen Road)
London
N16 7PA
WHEN:
1st September 2016
8:00 PM
ABOUT THE BABY FACTORY:
Like at least half of the worthwhile things in life, London-based folk rock duo The BaBy Factory started for the sake of sex, love or possibly both. Originally from the grimy, decadent so-called “Heaven’s branch” of Caracas, Venezuela, their love affair somehow evolved into a band, combining the transgressive spirit of its leader and guitarist Baldo Verdú with the melodic stylishness of a feminine voice, to produce a single musical mix packed with a funky sound that is as aggressive as well as is sexy.
ABOUT BALDO VERDÚ Y SU TONTO MALEMBE:
Once described as a Latin-swing-coup-d’état by a guy who was clearly out of his mind, Baldo Verdú y su Tonto Malembe is in fact a Venezuelan London-based association of musicians whose enthusiasm around certain political issues was not —and is currently not being— precisely well received by their governments. Established in 2014, this Breakfast Club of Exiles —as it was also called once or twice, consists of Mandred Olbrich (guitar). Joel Rojas Arriaga (drums and percussion) and it’s leader Baldo Verdú (vocals, guitar and percussion), who besides of being execrated from the Christmas gift list of quite a bunch of government personalities, also happens to be a songwriter, guitarist and percussionist with life-long experience among Venezuelan traditional rhythms as well as in genres as diverse as rock, funk and tropicália. These influences combined with the different musical backgrounds of each member of the group, all agglutinated by the notes of psychedelia, result in a sound that has been approved by the audiences from venues to major festivals such as Latin American Film Festival, Secret Garden Party, London Remixed Festival, Vagabond Festival, among others; both as a dance floor fire igniter as well as a mass-provoking political discourse. They recently went on tour around 11 cities of Europe, finishing on the 23, 24 and 25 of June with three shows at Glastonbury Festival 2016.